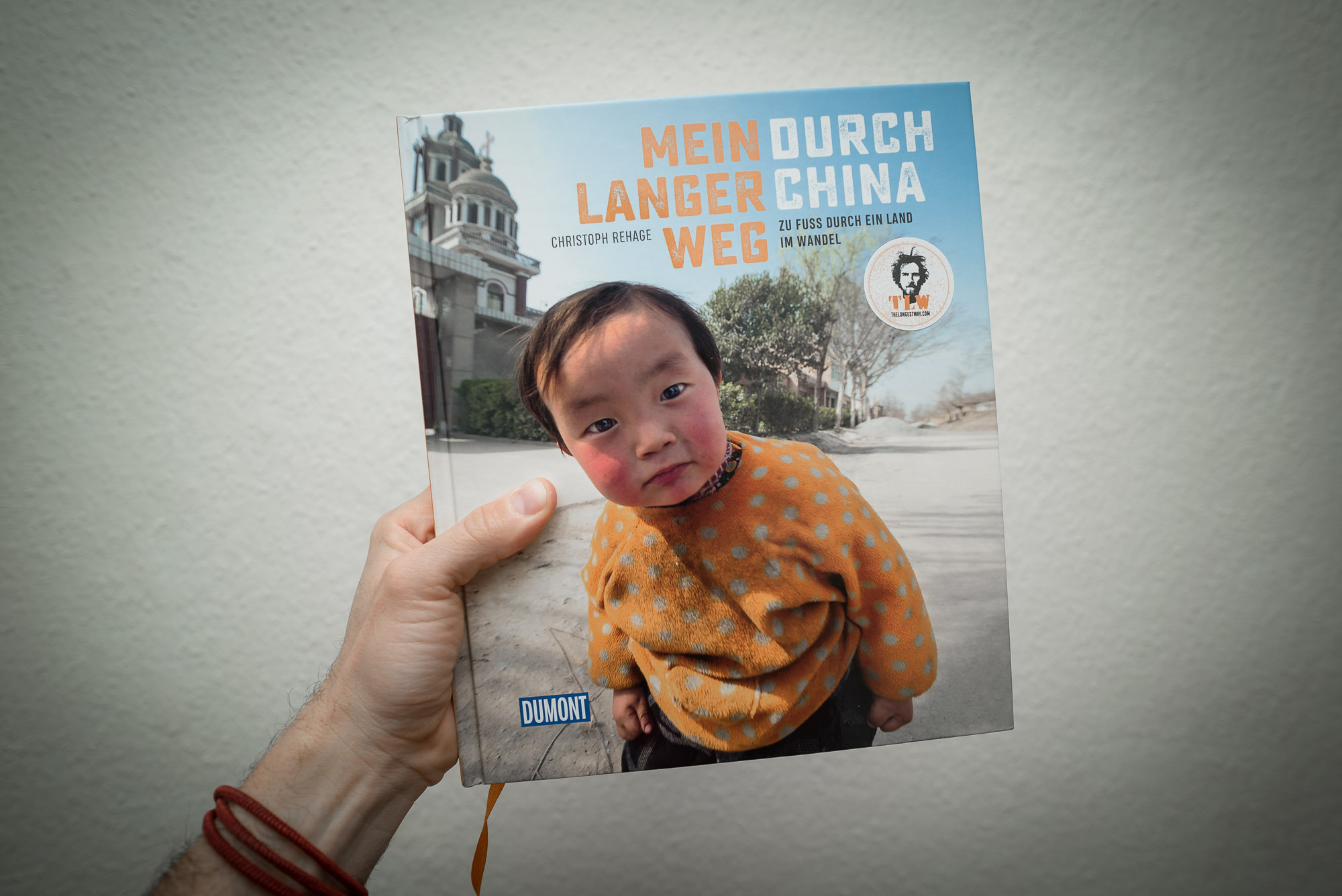 Remember my (German) National Geographic coffee table book “China zu Fuß”? Well, we decided to redesign the whole thing and add a bunch of new contents. It’s called “Mein Langer Weg Durch China” (My Long Way Through China), and it has one of the most charming kids I ever met on the cover: The inside […] 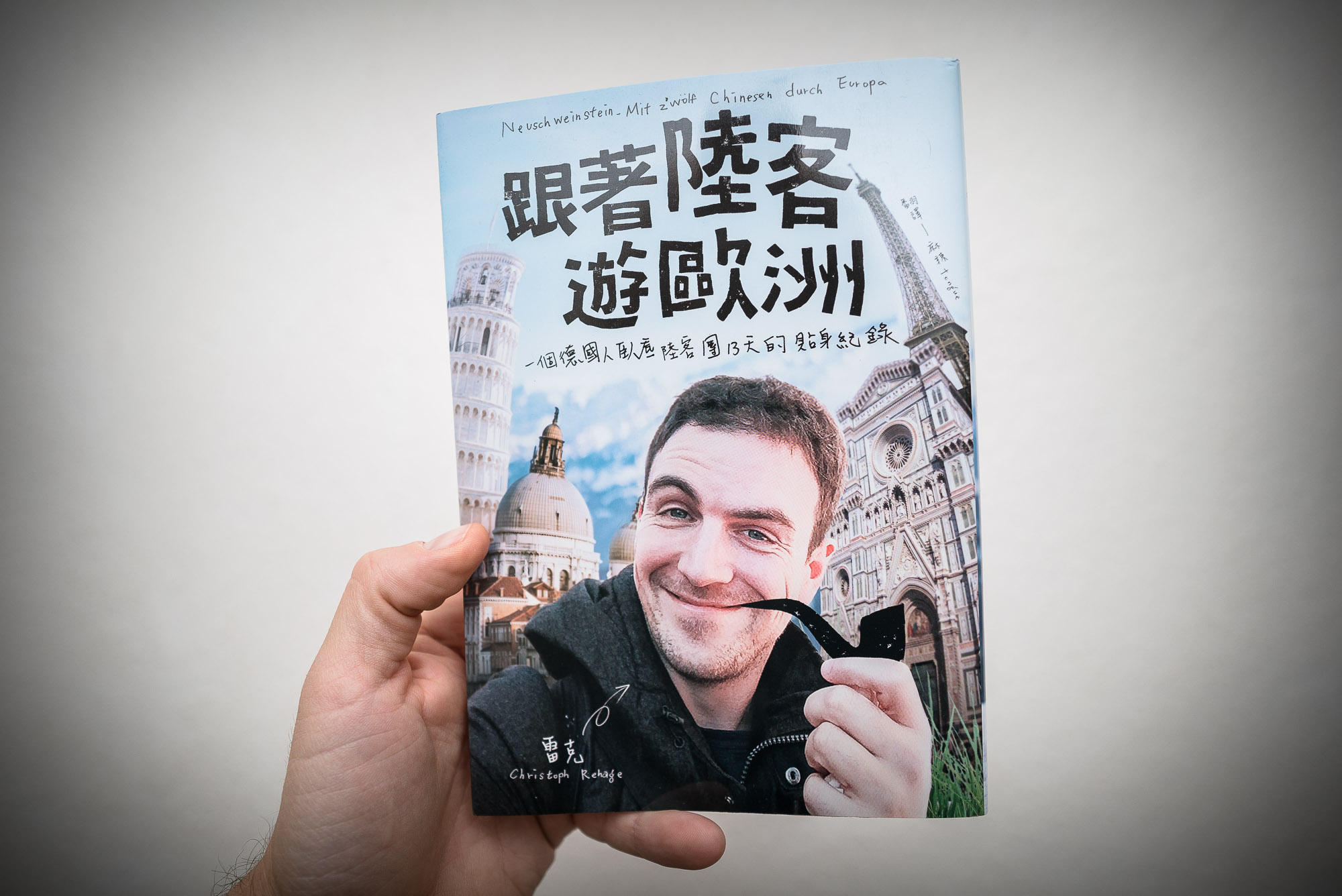 More good news from Taiwan! I had just arrived in Iran, and I was trying to fix the Caboose when this one hit the shelves: The title translates to “Traveling around Europe with Mainland tourists” (跟著陸客遊歐洲), which is exactly what the book is about. It’s the Taiwanese edition of “Neuschweinstein” – which tells the story […]

Taiwanese edition of “The Longest Way” 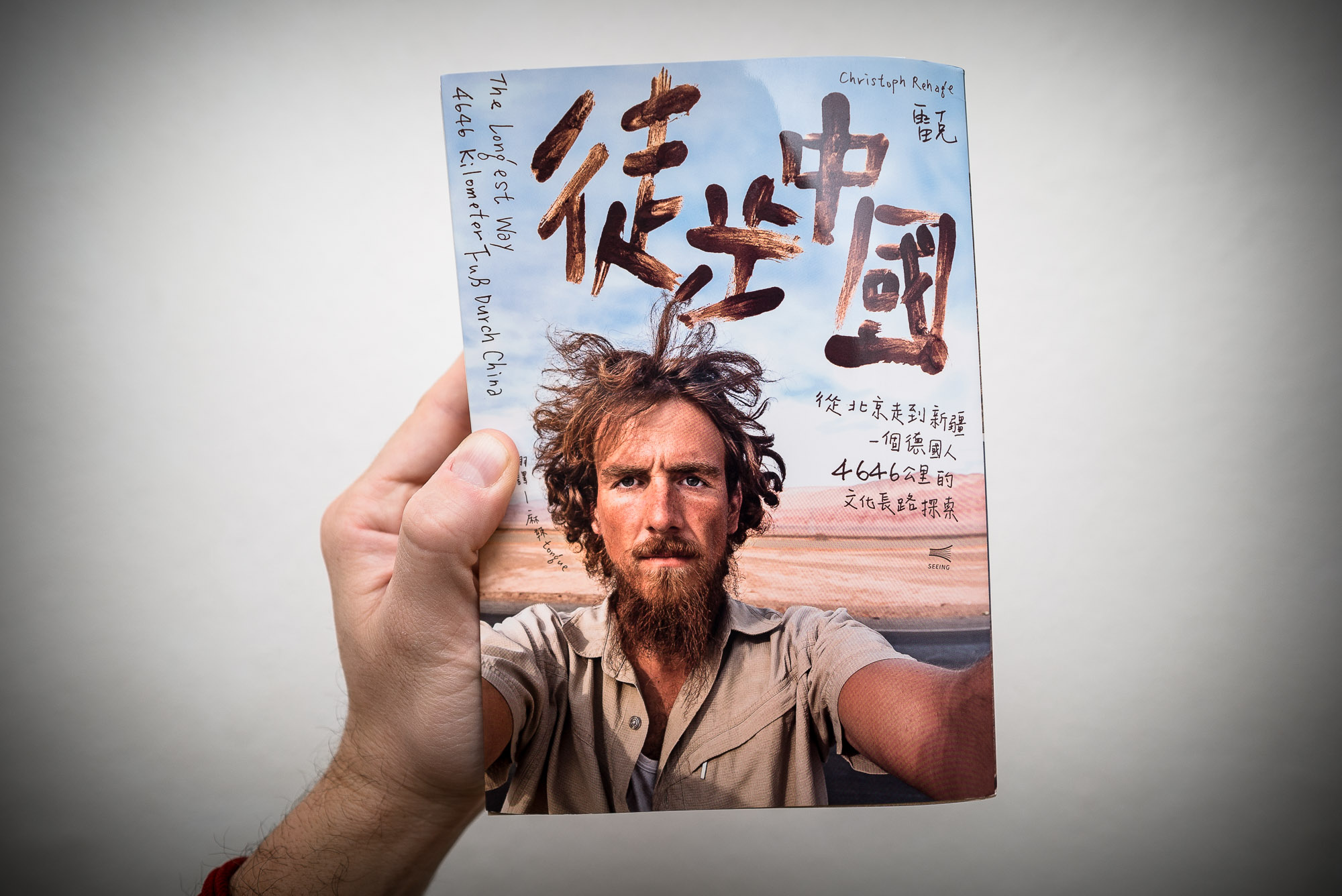 Ah, a great day! I was in Switzerland giving a presentation when this book came out: It’s the Taiwanese version of “The Longest Way”, published by the aptly named Walkers Publishing House in Taipei. Most people in Taiwan speak Chinese. That means this book actually doesn’t differ that much from the Chinese version, but since […] 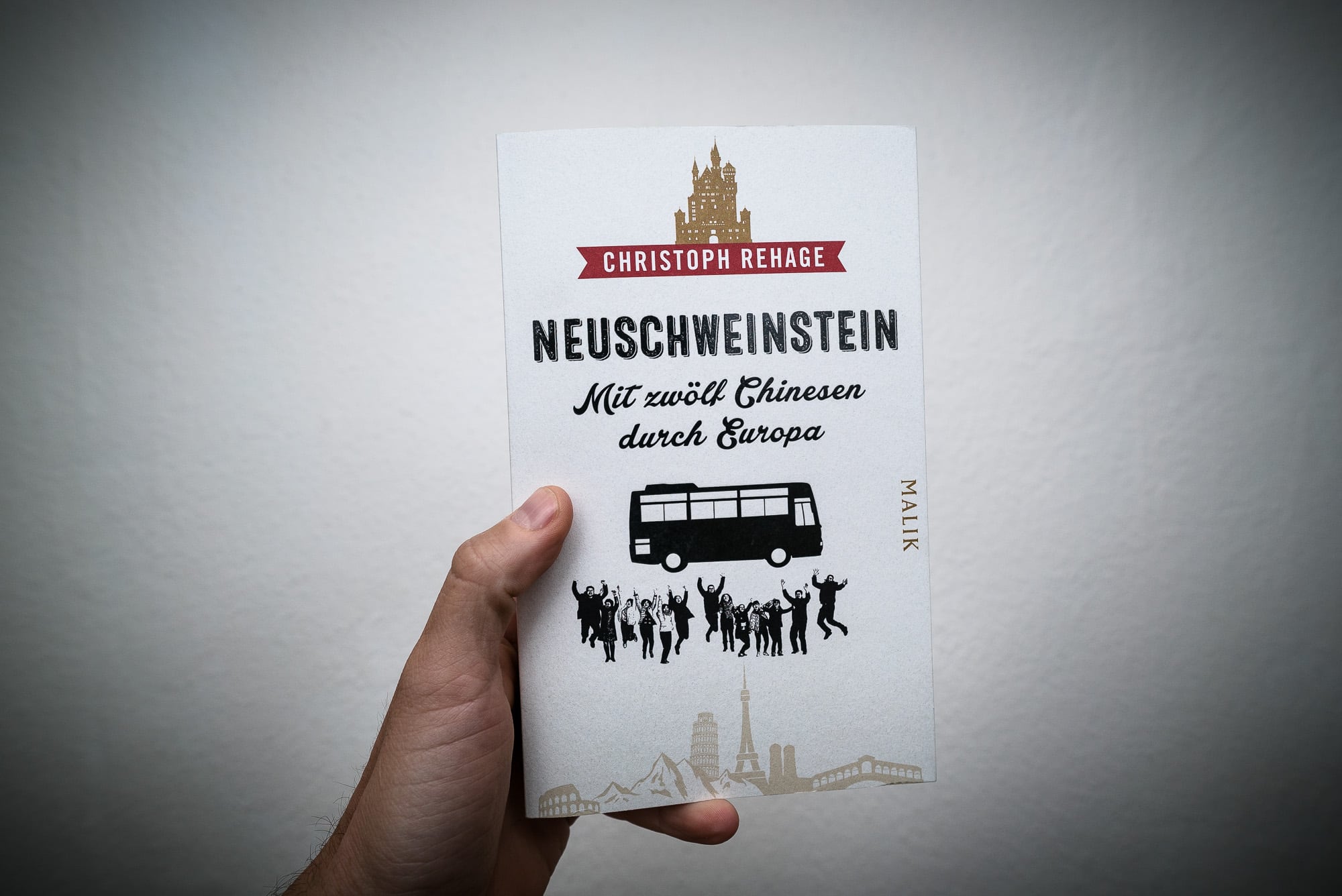 I was in Kazakhstan on the day this one came out. So I felt a bit jealous of my editors and basically of everyone else who was able to hold it before I did: “Neuschweinstein” is the story of how I went on a trip around Europe with a Chinese tour group. I wanted to […]

The Wheel – start in Khorgas 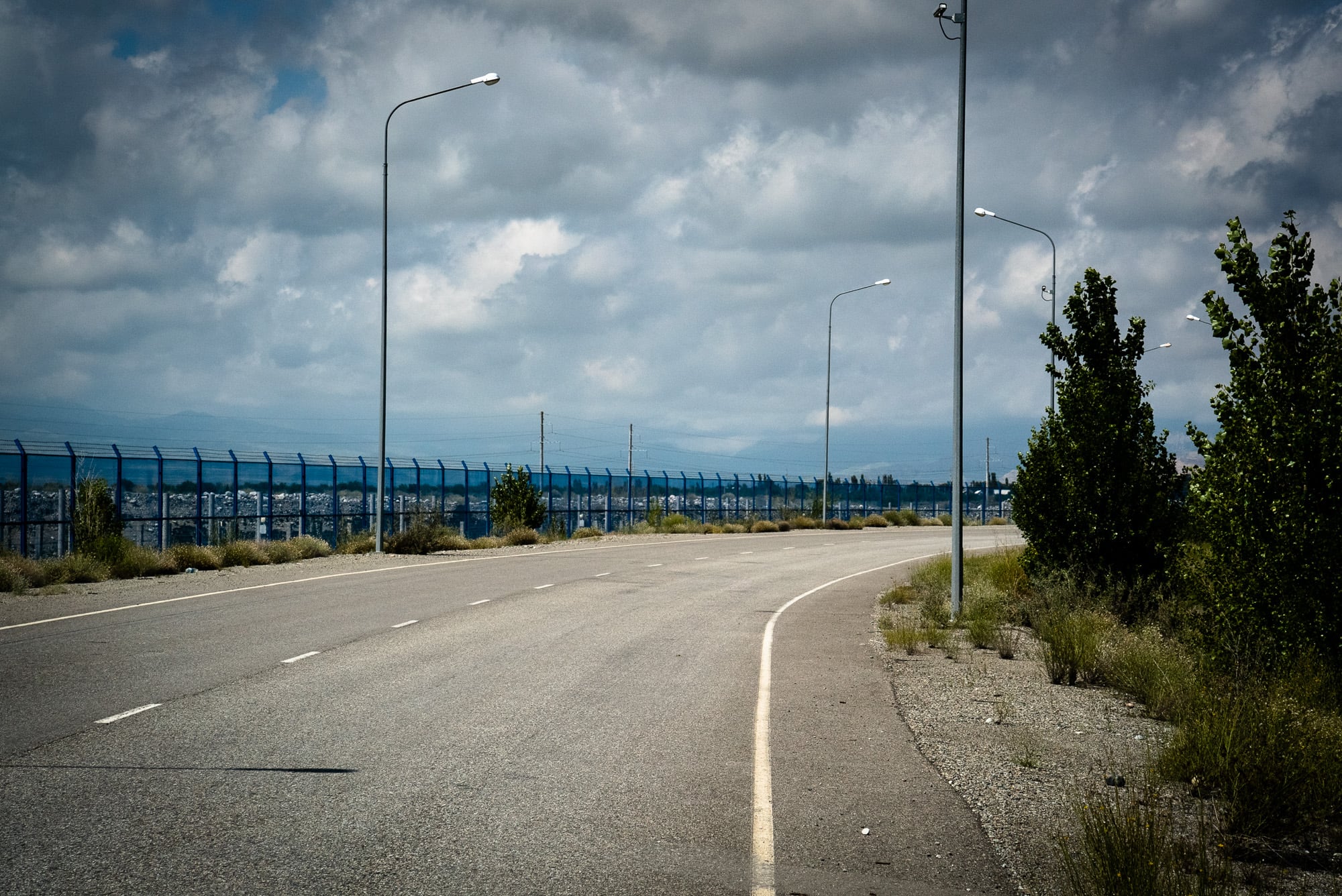 By loading the map, you agree to Google’s privacy policy.Learn more Load map Always unblock Google Maps Finally I was back on The Longest Way, this time setting off at the border of China and Kazakhstan, the place where I had stopped walking the last time four years ago. Here’s how it came to pass. […]

Kyrgyzstan photos in a book 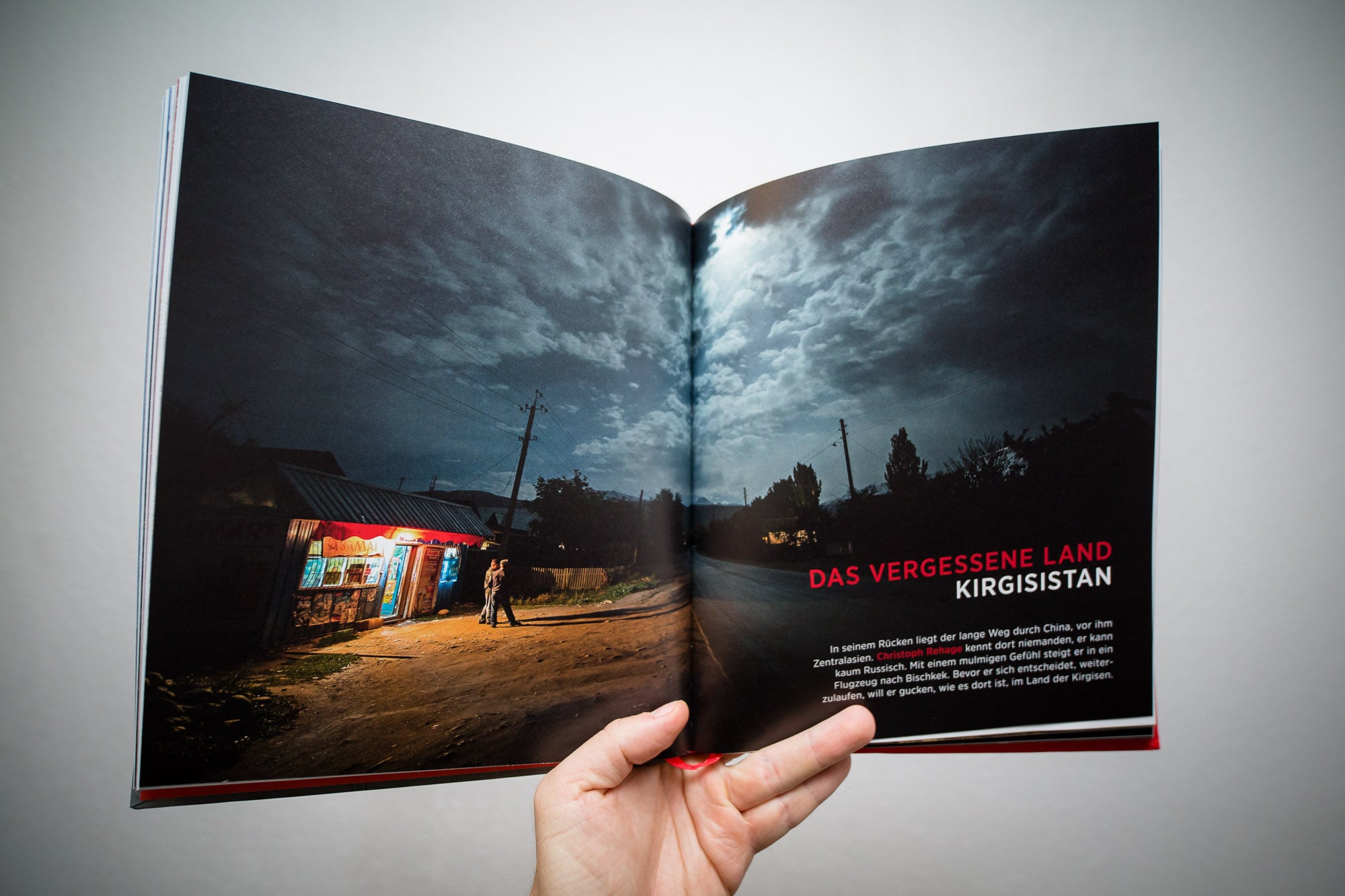 Yay, some of my photographs from Kyrgyzstan have made it into a book! It is called “Abenteuer” (“Adventure”), and it is a coffeetable book produced by the guys from the European Outdoor Film Tour and National Geographic. Let me tell you one thing though: the other people portrayed in this book are so awesome, to be featured […]

Life and Death on Weibo 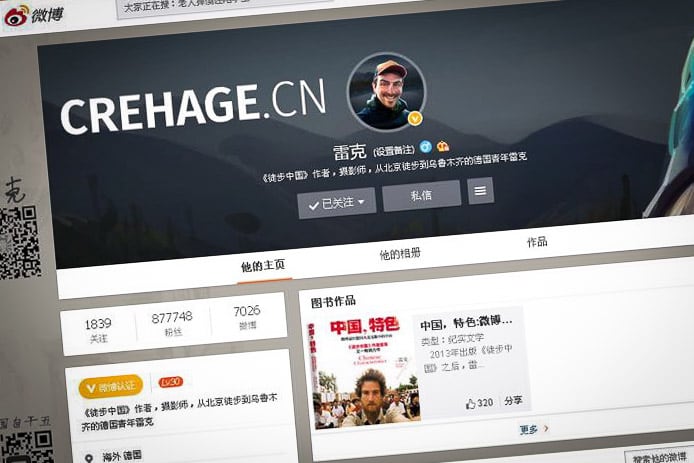 Here’s how I became one of the most influential foreigners on the Chinese microblogging platform Weibo, and how I died on it.   I set up my account in April 2011. At that time, I had a dozen followers by default. I composed a greeting message, hit “send” and waited. Nothing happened. Four years later, […]

Russian edition of “The Longest Way” 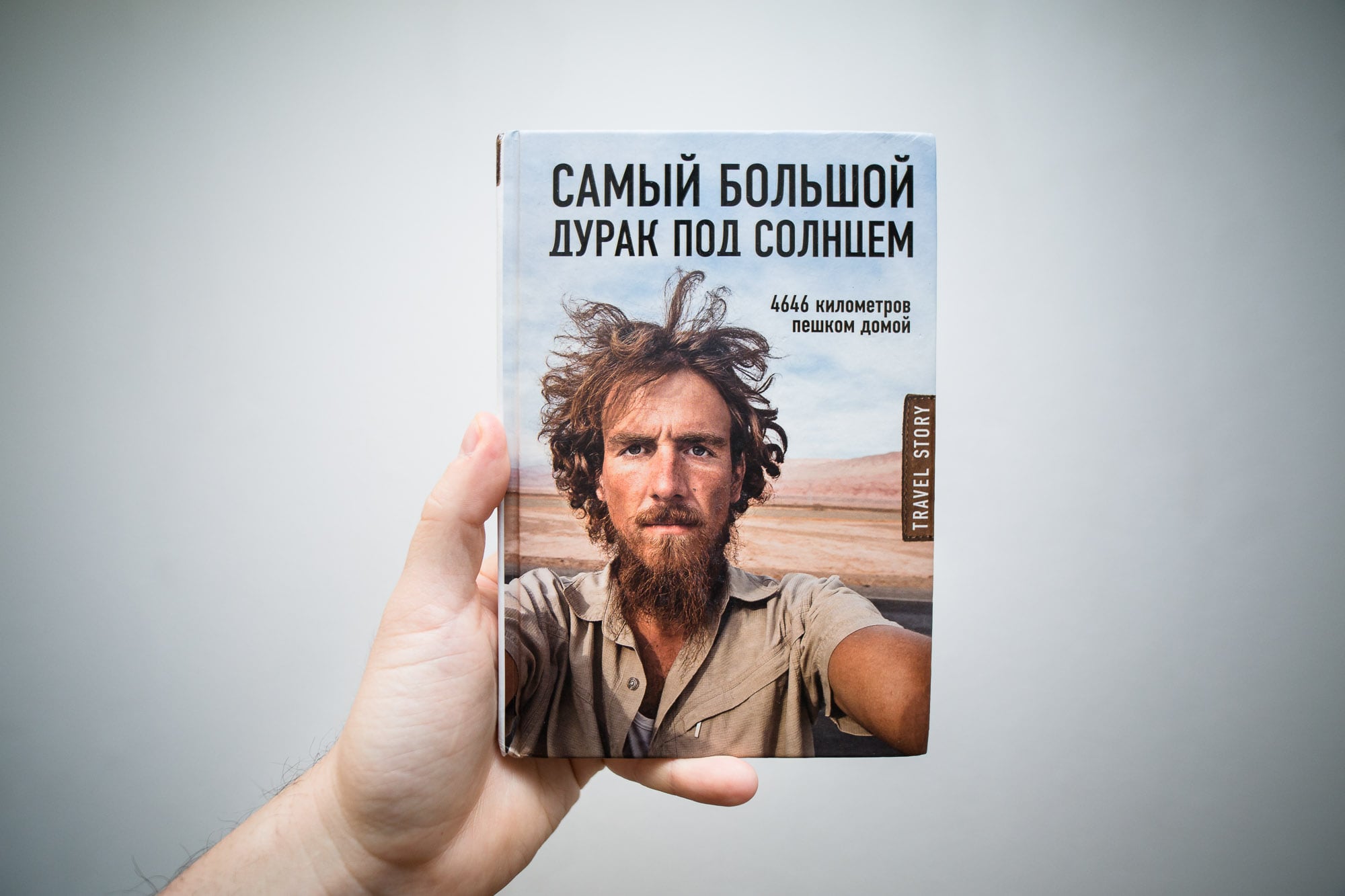 My book “The Longest Way”, which has been doing pretty well in Germany and China, is finally out in Russia, too! And it has such a cool title: Самый большой дурак под солнцем! Now I am not very good at Russian, but even I know that this means something along the lines of “The biggest fool under the sun”. Never ever […] 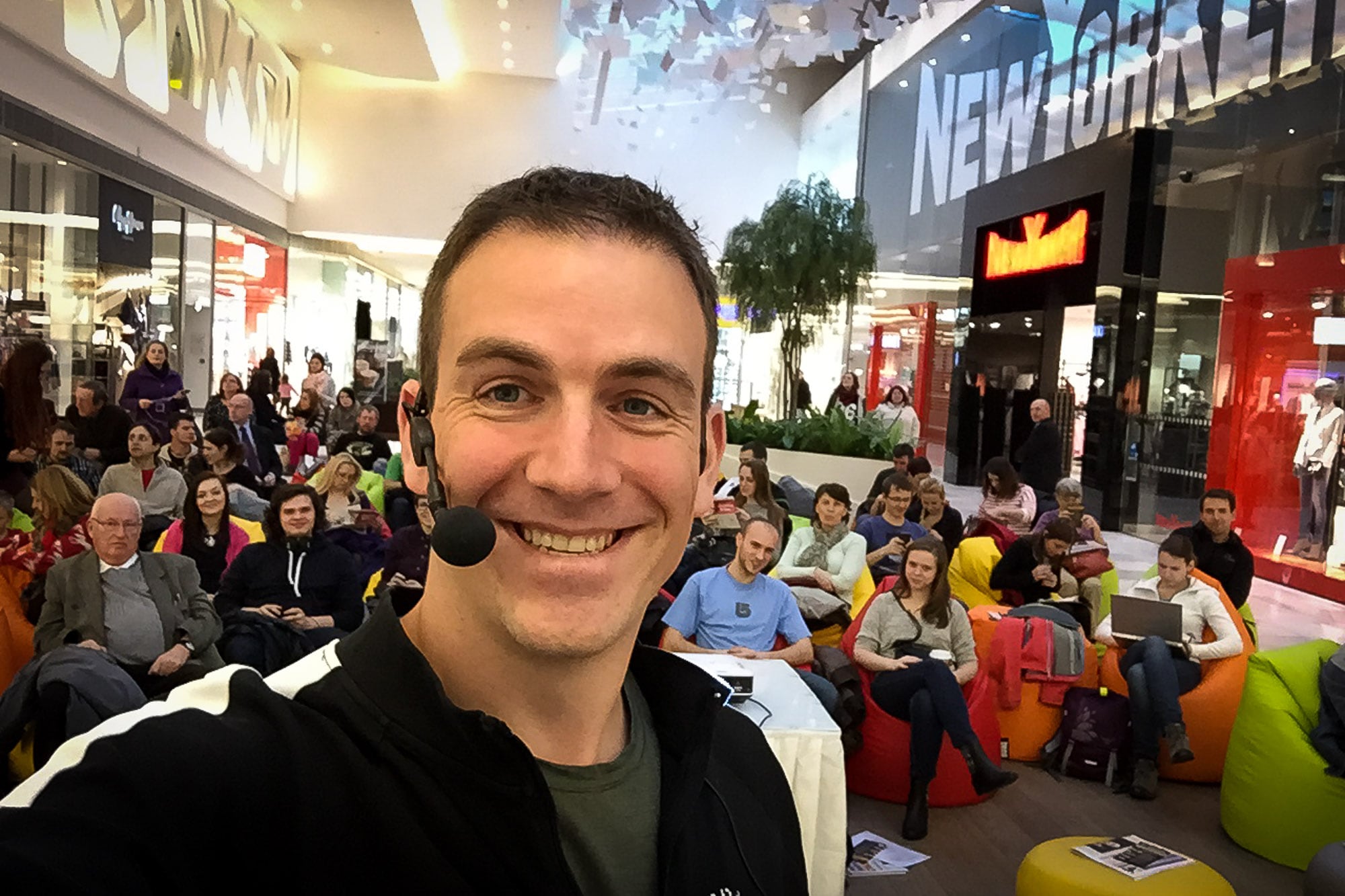 Plzen, Czech Republic. This was the last one for now. And it was a good one. In the last three years, I have traveled to cities in Germany, Switzerland, Italy, China and the Czech Republic, and I have given more than 30 presentations in 3 different languages. The presentations were always about the same topic: The […] 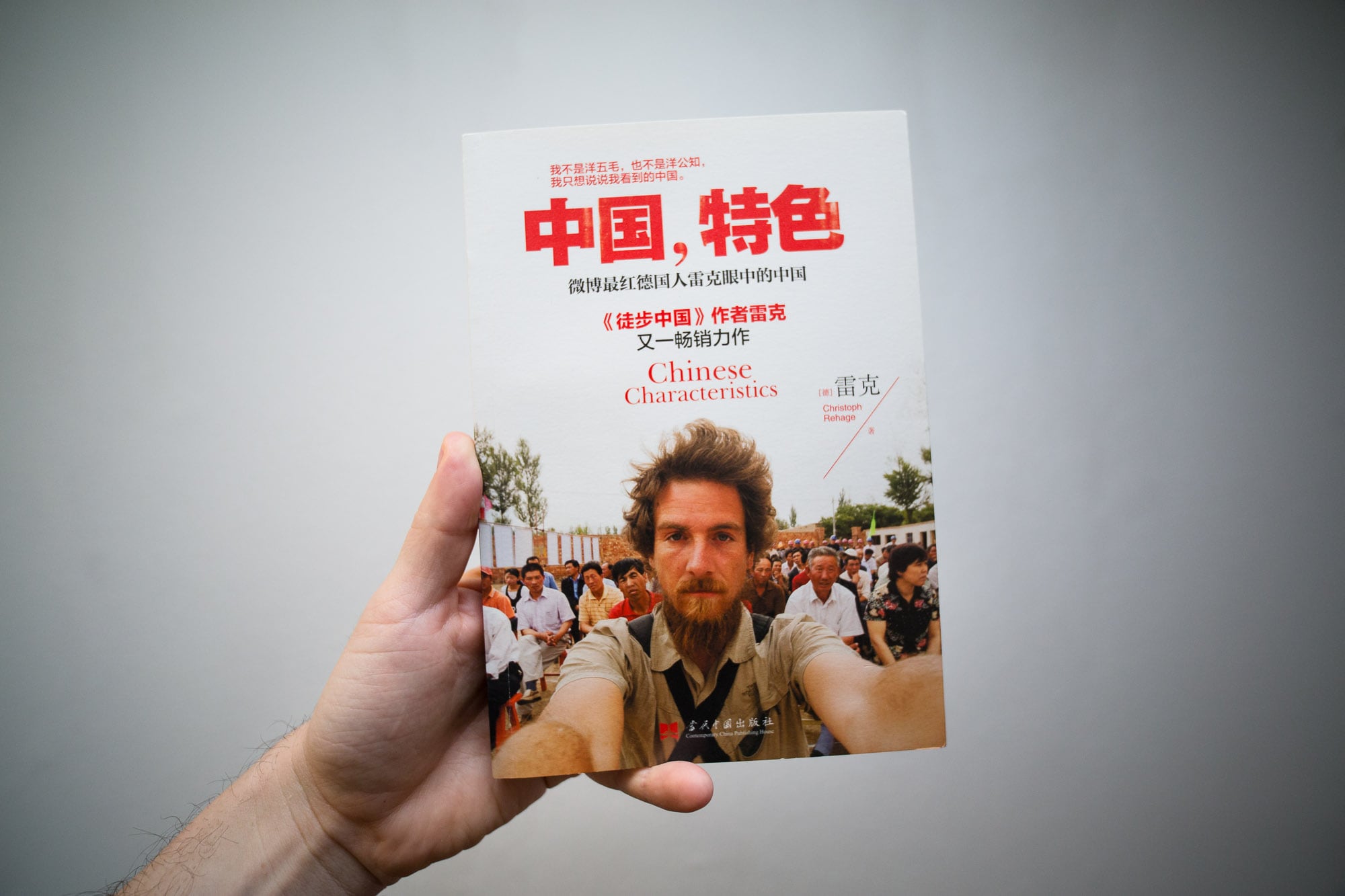 This is the first book I have ever written in Chinese. It’s called 《中国，特色》 – “Chinese Characteristics”, and there is no foreign language version of it out (yet). Now when I say “book”, it makes it sound like some kind of novel or novella. But it really isn’t. It’s a collection of articles that I wrote for Chinese […] 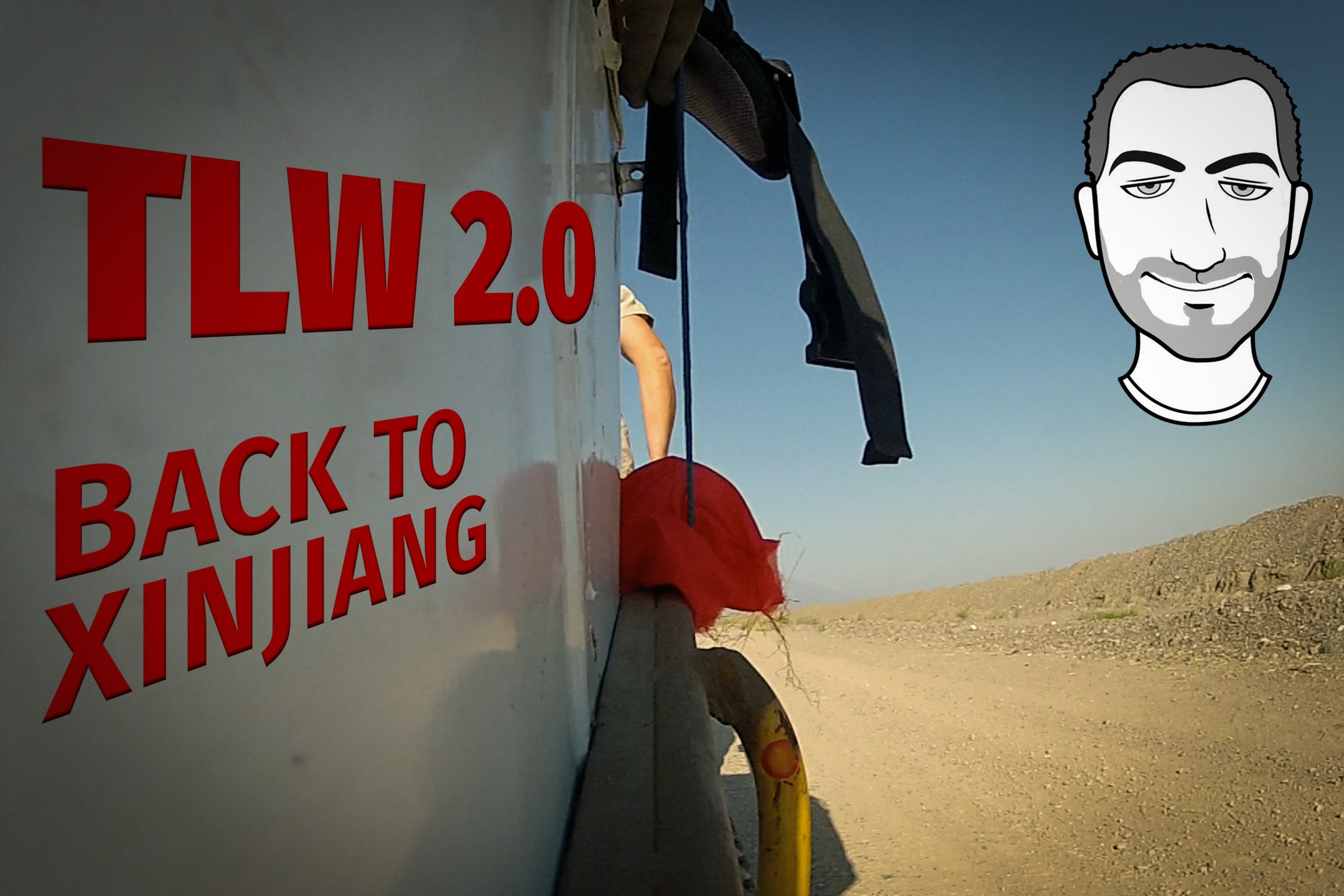 I am so happy to be able to finally show you my second TLW video! As you might already know, The Longest Way is a project that I started in the fall of 2007 – the original idea was to walk home from Beijing to Bad Nenndorf in Germany. I never made it. Or rather: I haven’t made it […]

Chinese edition of “The Longest Way” 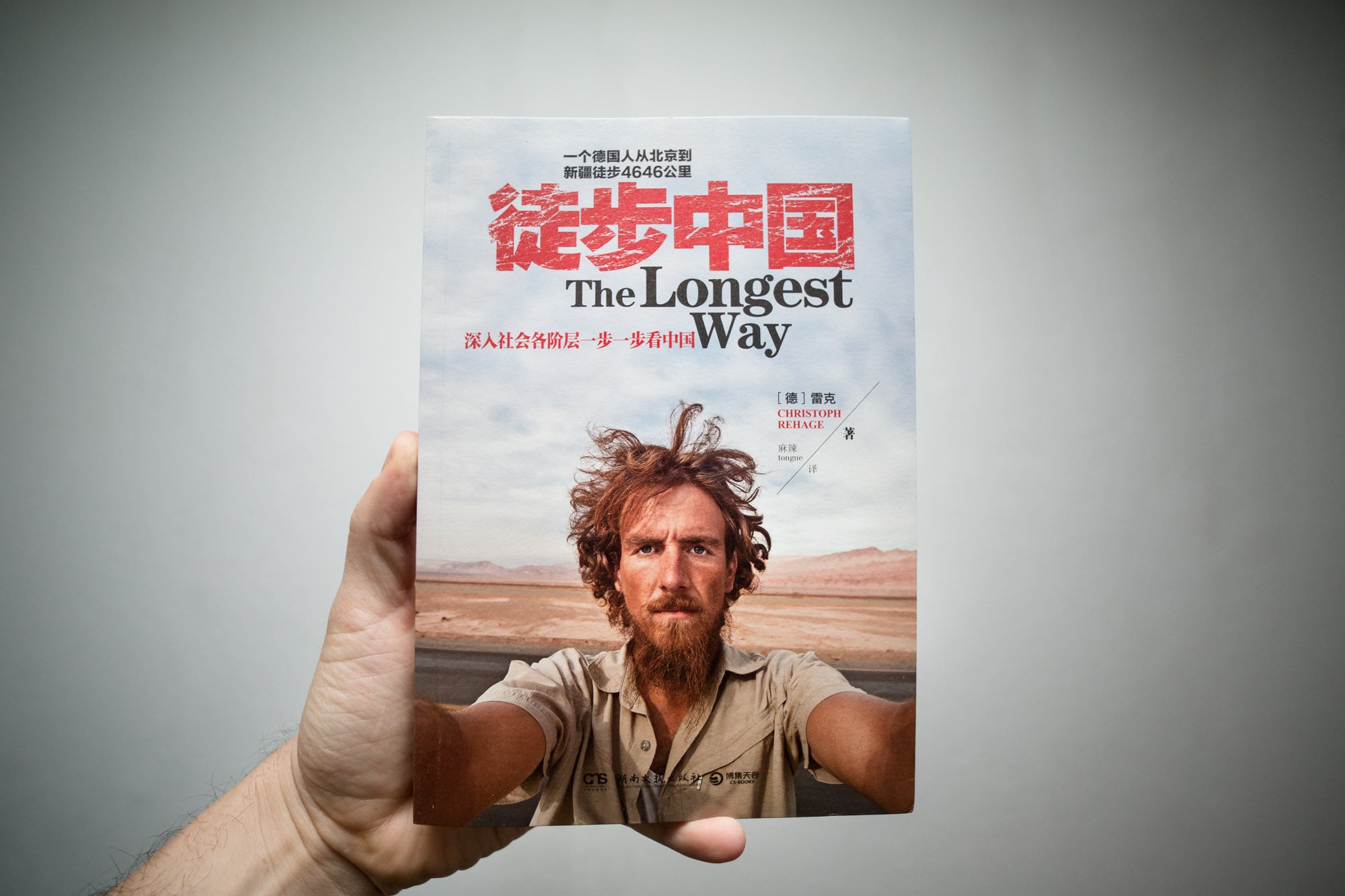 So my German book “The Longest Way” (don’t ask me why its title is in English, that’s just how we roll in Teutonia) finally has a Chinese edition. This one is called《徒步中国》(“Walking through China”), it was published by the Beijing-based cultural media company CS-Booky, and it has been a lot of fun so far. Before you ask: I […]

The Triumph – stop in Khorgas 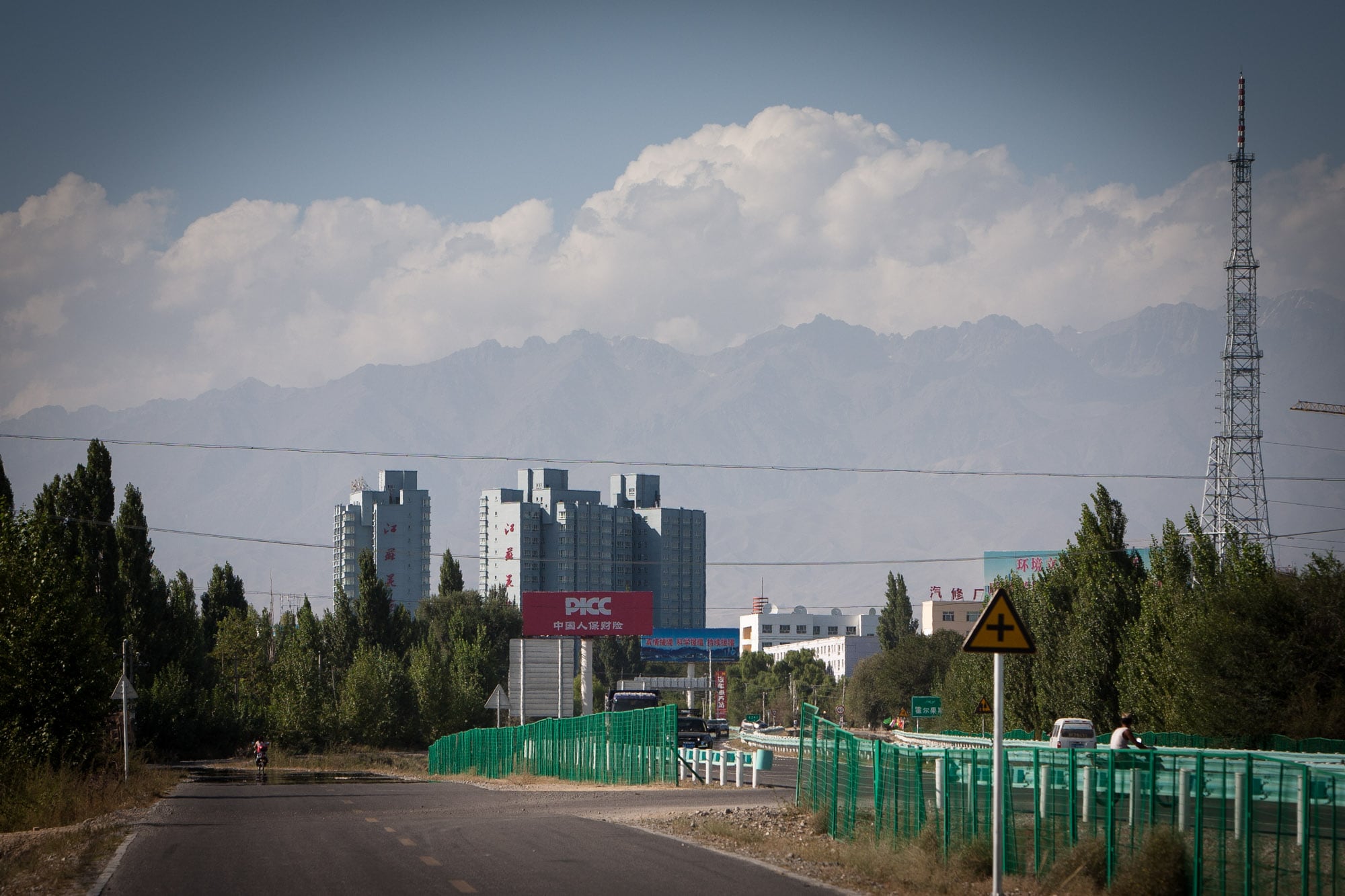 By loading the map, you agree to Google’s privacy policy.Learn more Load map Always unblock Google Maps This was the day I finally arrived at my first border crossing: Khorgas, a small town dividing China and Kazakhstan. I had walked for four weeks to get here from Usu, and I had made about 500km. Much to […]

The Fear – start in Usu 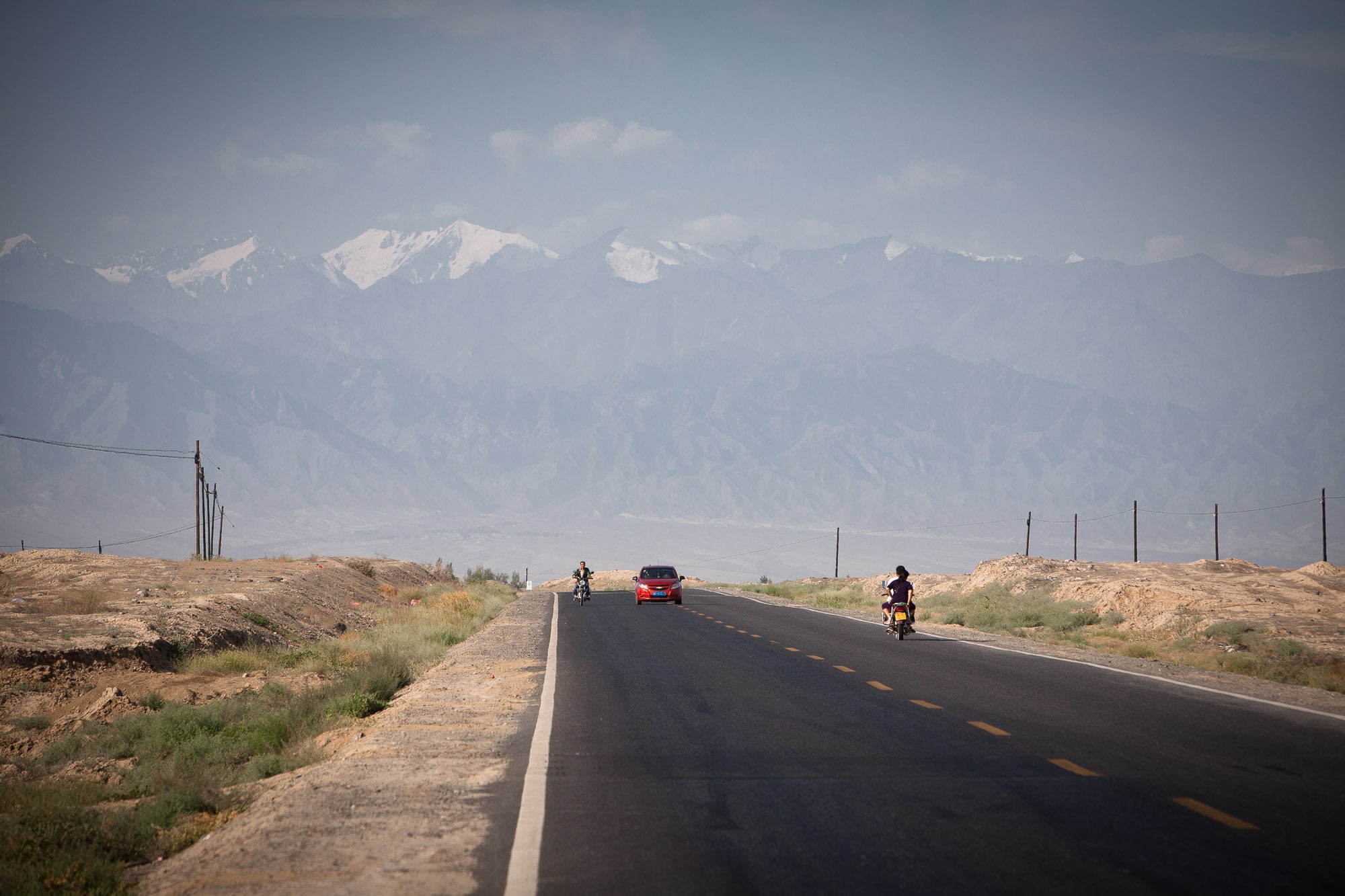 By loading the map, you agree to Google’s privacy policy.Learn more Load map Always unblock Google Maps It was the summer of 2012. My books “The Longest Way” and “China Zu Fuß” had just come out, and there was only one place where I wanted to be: on the road. I felt very scared though, mainly because […] 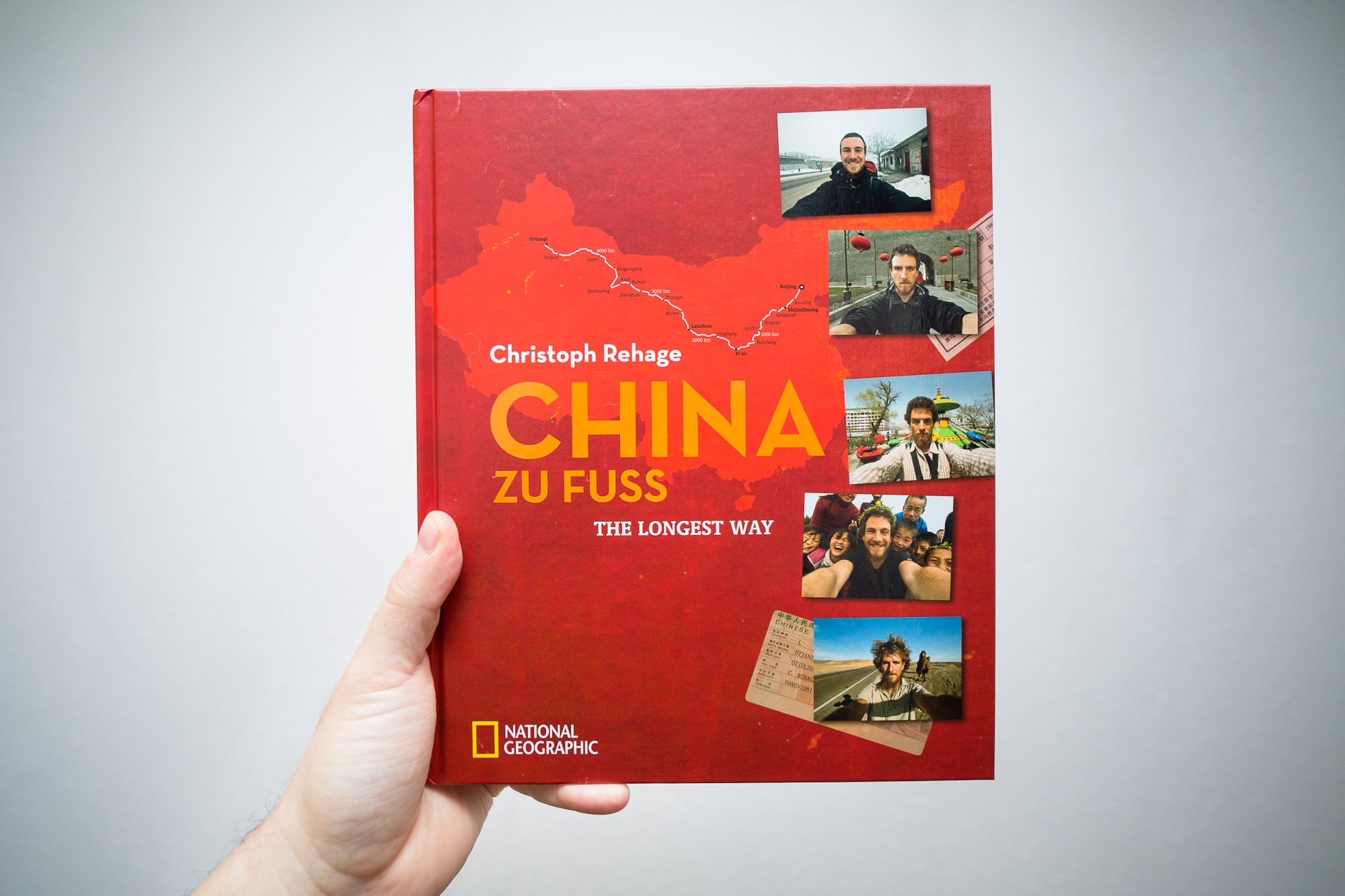 This one is also in German. I wrote it at the same time as I did “The Longest Way”, because I felt that it was important to tell the story in two different ways. Here’s the difference: while “The Longest Way” is raw and personal at times, this one is more about the aesthetic aspects of the journey. […]

My first book “The Longest Way” 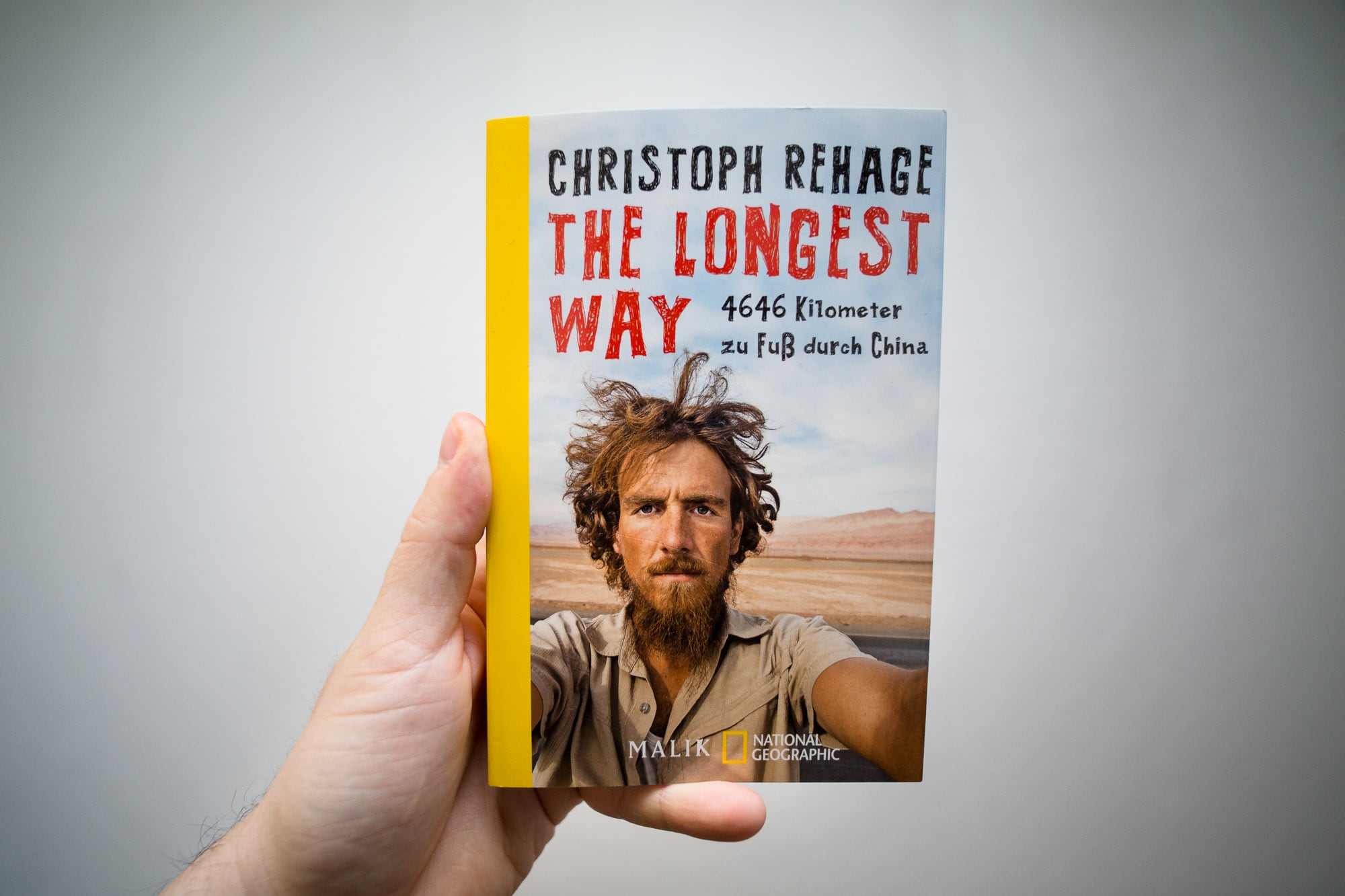 Wow, this one took a while. Two years to be exact. I wrote it in German, so please don’t get confused: “The Longest Way” is not an English book, it’s in German! Why the English title then, you ask? Good question. I think it’s because we thought it was ubercool like that. Yes, that’s why. Anyway, it took me two […]

The Rage – stop in Usu 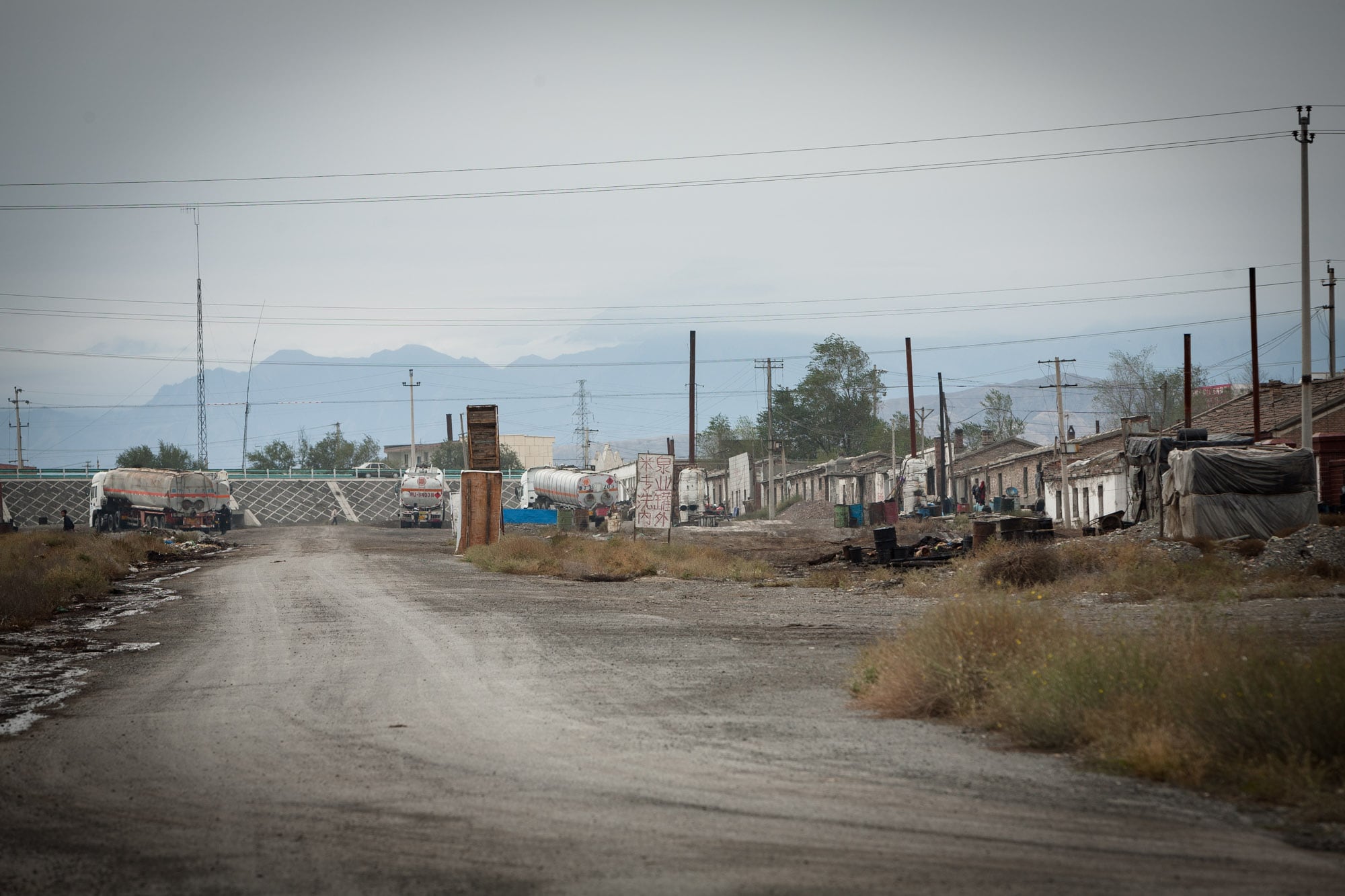 By loading the map, you agree to Google’s privacy policy.Learn more Load map Always unblock Google Maps The original plan was to walk for a few weeks, then stop and return to Germany. After all, I still had university classes to go to and two books to write. So, after being on the road for […]

The Pain – start in Ürümqi 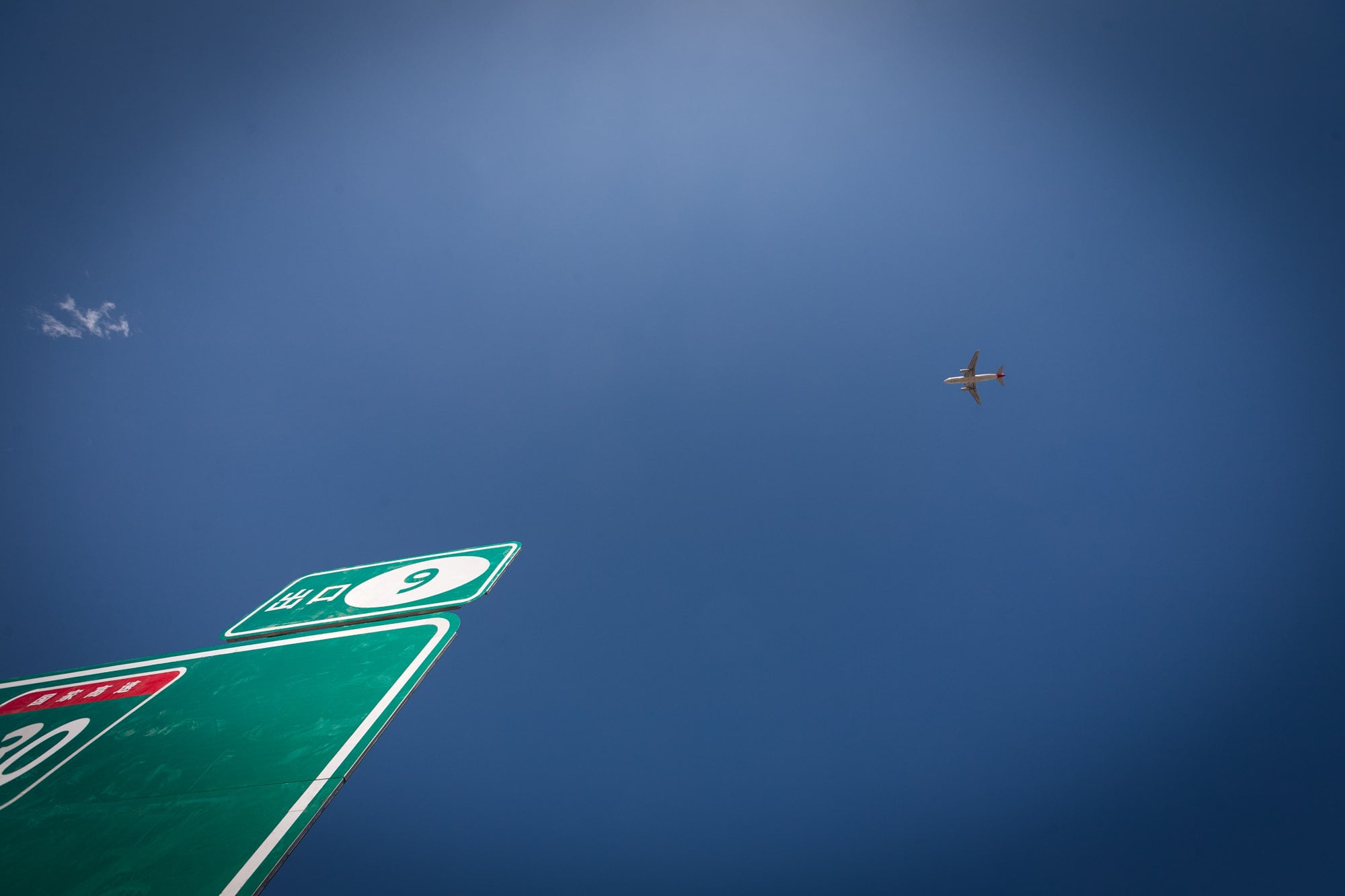 By loading the map, you agree to Google’s privacy policy.Learn more Load map Always unblock Google Maps It was the summer of 2010. I was in the process of writing “The Longest Way” (German) and “China zu Fuß”, and I had just spent a few weeks in Vladivostok in Russia’s Far East. Writing had turned out […] 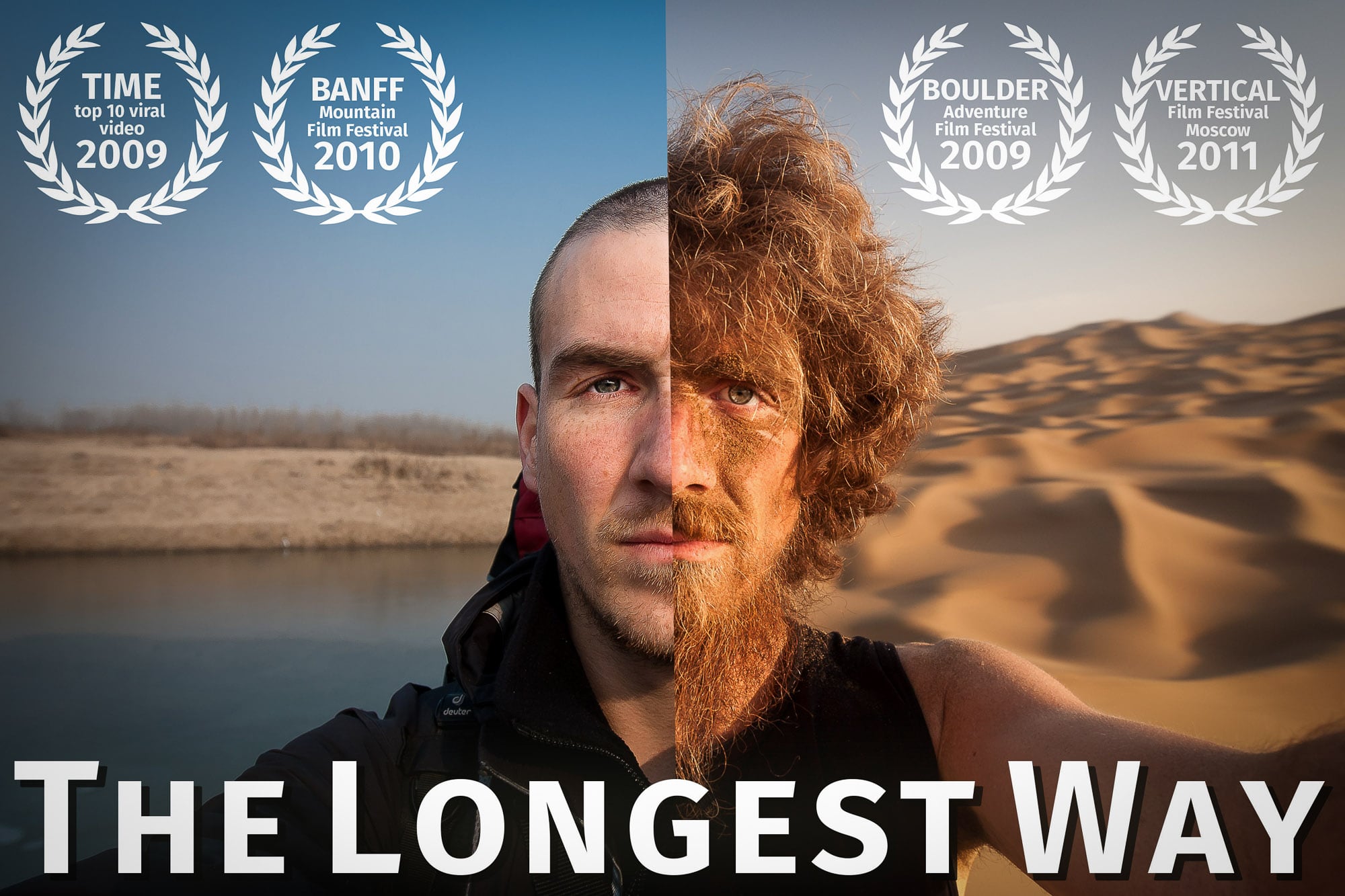 Yay, I am finally able to show you the absolute final version of the TLW-video! In case you didn’t know: TLW stands for The Longest Way, a project which saw me attempt to walk home from Beijing to Germany in 2007/08. I didn’t make it. I did, however, walk for a year, during which I let my hair and […]

The Beard – stop in Ürümqi 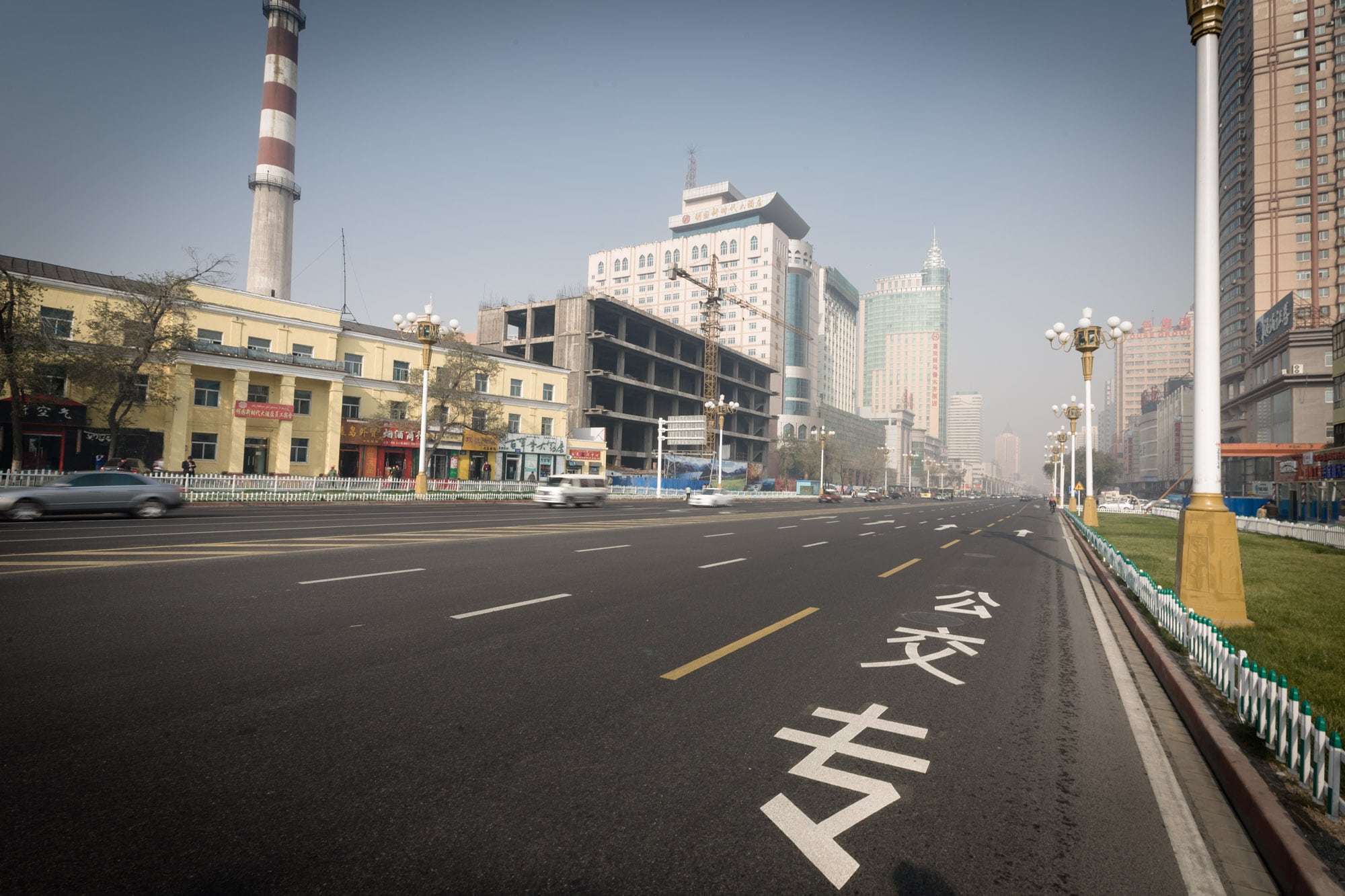 By loading the map, you agree to Google’s privacy policy.Learn more Load map Always unblock Google Maps This was the last day of The Longest Way. It was October 25th 2008, almost one year after I had started my walk home from Beijing to Germany. It was a Saturday, and it was the day of my […]

The Mammoth – start in Beijing 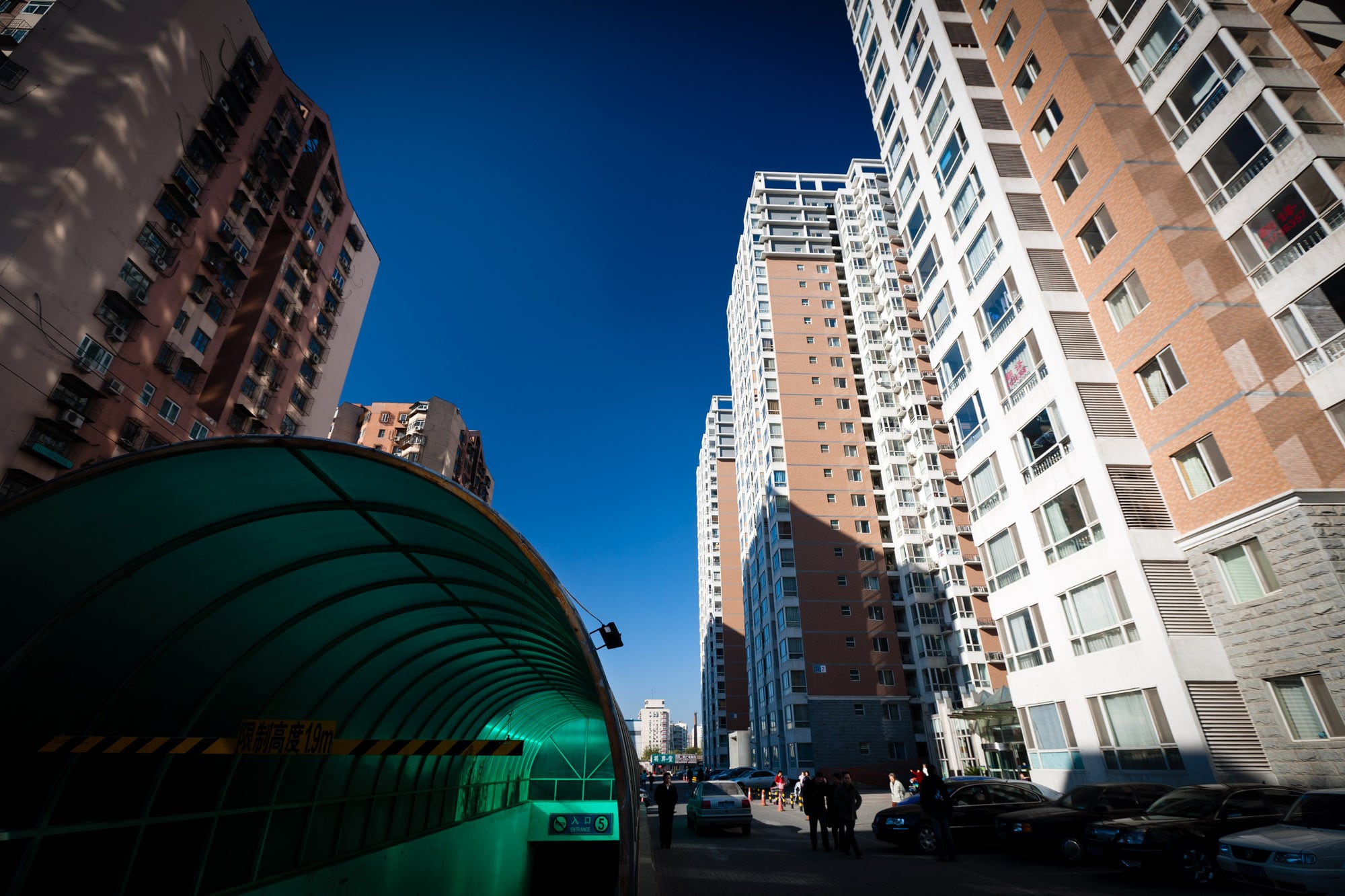 By loading the map, you agree to Google’s privacy policy.Learn more Load map Always unblock Google Maps Behold, my first walking day! Or rather, the day that I started to walk from Beijing, a major city in China, to Bad Nenndorf, a minor, eh… city in Germany. Walk home for a few years. What an ambitious idea! What a […]

Walk from Paris to Bad Nenndorf

This is the diary I kept during my walk from Paris to Bad Nenndorf in Germany in the hot summer of 2003. I started out with my buddy Knarf and with Puk, the family dog. Knarf had to leave us after about a week, so Puk and me continued on our own. It took us 23 […]